Graduating from St. Johns High School in 1998, Chad had an early passion for playing soccer.  As a junior in high school, he was voted MVP and led the team in scoring.

After graduation, Chad went on to attend Western Michigan University where he was a 4-year letter winner and led the team in scoring for 3 of the 4 years.

Completing his college soccer experience as a student did not dampen Chad’s passion for soccer.  He went on to become the assistant soccer coach for Western Michigan University, a position he held for 6 years.

Chad began his college head coaching career in 2009 at Olivet College.  From 2009-2013, Chad’s teams excelled over any of Olivet’s soccer teams in the program’s 40 year history with a record of 53-25-6, earning them national ranking at Division III.

During this time Chad also coached girls soccer at Plainwell High School, leading the girls to winning seasons and the Division II state championship title in 2011.  In recognition of his excellence, the Division II Michigan High School Soccer Coaches Association named him Coach of the Year in 2011 and 2012 and led him to be a finalist in the National Coach of the Year in 2012.

Chad’s passion for soccer and the excellence displayed in his playing years and early coaching career were a solid background when Western Michigan University offered him the Head Coaching job for men’s soccer.  The University was already familiar with Chad’s playing and coaching abilities.

Chad describes his coaching philosophy as preparing his players to be tough in a lot of different ways so they are able to deal with whatever a given game will throw at them.  “We are always going to be a blue collar team,” he summarizes--consistently hard working and giving 100%.  His players are taught to be opportunistic and be an attack team.  Western Michigan’s Men’s Soccer record reflects this philosophy with consistently excellent seasons under Wiseman’s direction.  In 2013 the Broncos achieved 4-1-1 MAC record, best in the school’s history.  In 2014 the Broncos advanced to the MAC Tournament for the second straight season.  2015 proved even better.  The Broncos ended the season with 11-4-4 overall.  The team set a new school record for 12 shutouts.  Western Michigan went 3-1-1 during MAC play.  Chad Wiseman was then named Mid-American Conference Coach of the Year.  2016 continued Western Michigan University’s winning soccer streak.

Currently, Chad Wiseman and his Western Michigan Men’s Soccer Team are ranked 6th in the nation.  Wiseman’s philosophy of playing fast, consistent rhythm, no careless turnovers, and a balanced team with depth is bringing Bronco Men’s soccer to new heights.

Chad Wiseman has developed his passion for soccer and achieved a dream come true at Western Michigan University.  He persevered and honed his skills as a leader of young men working hard to win and consistently become better at their skills and their attitudes.  He has deep appreciation and respect for the schools and community of St. Johns. 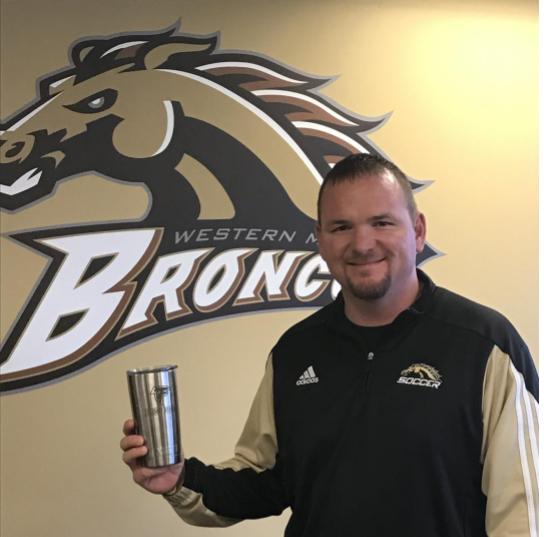